Congressional Democrats helped to form an unlikely alliance last week.  Their showing at the Supreme Court nomination helped wake up quite a few more Americans who joined the #WalkaAway Campaign.

In yet another polarizing issue, the accusation of Christine Blasey Ford set the country on fire.  Despite the complete lack of evidence, Democrats threw their support behind Ford.  The #MeToo shot to the top of “trending” on Twitter with a new one for good measure; #IBelieveHer.

Meanwhile, Republicans and Conservatives approached the issue with skepticism and doubt.  “Why,” you ask? Well, let’s look at the facts.

The Evidence (Or Lack Of)

There are also conflicting stories in regards to how she remembered the offense later in counseling.

According to Ford, she was remodeling her home and wanted a second door installed so she “could escape” and was claustrophobic after the alleged attack.  This remodel was for a rental property, and all of this occurred in 2008, not 2012 as she claimed.

Dr. Ford deleted ALL her social media profiles before sending the letter.

Holton Arms scrubber her yearbooks from the internet, but someone found them and saved them first. **MIC DROP**

For starters, she’s a far-left activist who had pictures on her social media accounts in a Pink Women’s March hat with a sign that says “Not My President.”

Allegedly, a former Facebook friend saw a post where she was bitter about then-Supreme Court nominee, Neil Gorusch.  In the post, she states that someone should accuse him of rape to block the nomination.  When the friend replied it was unethical to destroy an innocent mans’ life over false accusations, she replied “So.” (This is allegedly and sent by a tweet.  It has NOT been confirmed, however, so take it with a grain of salt.)

Next, her yearbooks detail racist, alcohol-fueled weekends at Holton Arms.  Sexual encounters with boys were not only frequent, but they also bragged about them.  Lovely.

There’s MUCH more.  Maybe in another article. Let’s keep moving.

Many people believe Dr. Christine Blasey Ford.  They think that something happened to her.  It just wasn’t Brett Kavanaugh who did it.

Senator Diane Feinstein received this letter back in July.  She decided to sit on it until the 11th hour of the confirmation process.

Then, as if by magic, the letter gets leaked to the public and Dr. Ford’s request to remain anonymous was ignored.  The Democrats sprung into action to not only destroy one man’s life but their “victim’s” as well.

“I will oppose Judge Kavanaugh’s nomination with everything I have, and I hope a bipartisan majority will do the same. The stakes are simply too high for anything less.” – Senator Chuck Schumer 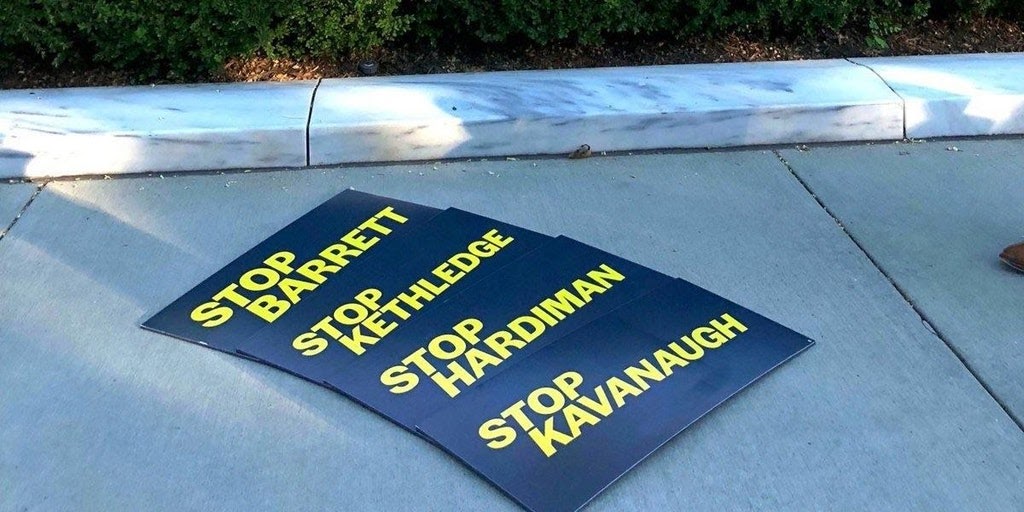 Before they announced a nominee, the Democrats had signs printed opposing all the top nominees before one was named.

The entire confirmation process was a complete circus with the interviews being interrupted about every fifteen minutes.

That was all before the accusation was even released.

During the Ford/Kavanaugh testimony, it was made clear that Senator Feinstein and her staff hired the attorneys for Dr. Ford.

The line of questioning to Judge Kavanaugh was hardly questioning at all.  It was a collaborated effort by Senate Dems to bully the judge into withdrawing his nomination and agreeing to an FBI investigation.

The circus continued, and as the proceedings went on, it became more and more clear that this was, in fact, a political hit job.  It was a calculated character assassination of a man who spent his entire life defending our Constitution so that he could watch it get desecrated in his name.

This embarrassing show of the Democrats weaponizing the #MeToo for political gain was the last straw for many.

It was disgusting and embarrassing.  Many feel bad for not just Judge Kavanaugh but Dr. Ford as well.  The blatantly obvious politically motivated seek and destroy was exactly what many on the left needed to call it quits with the Democrats.

Looking for my early polling station ASAP. After seeing what these people tried to pull on America and do to him and his family, I could never vote for a Democrat again!!! NEVER!!! #Walkaway MAGA

I can do this all day.  These were just at the top of the search results.  There are many, many more.  Check for yourself.

Good job, Democrats.  Not only did you add fuel to the supposed “Russian Bot” #WalkAway Campaign, but you also may have just destroyed your mid-terms.

So on behalf of all of us in the #WalkAway Campaign, we want to thank you AGAIN for your support.  We couldn’t do it without you.

Now get back out there and screw up some more stuff.  We have the #WalkAway March coming up soon!

2 thoughts on “#WalkAway Gets Unexpected Boost From SCOTUS Circus”