I met a man the other day.

He told me his story which I could only describe as an anomaly wrapped in an oxymoron and topped off as a conundrum. At least by stereotypical standards that are widely accepted by the masses.

Before the end of this story, I expect people on both the right and the left sides of the spectrum to scratch their heads in wonder.

This is the story of a woman; a strong-minded, passionate and intelligent woman who fought hard against the injustices she perceived in the world around her.

This is also the story of a man; an educated, compassionate and analytical man who seeks to understand this world through honest, respectful conversation.

Now, before we start this story; I need to disclose that this person must stay anonymous for safety reasons.

Many on the right will celebrate this story as evidence that conservatives are a loving, tolerant, accepting group who welcome this person with open arms.

Those on the left will probably lash out, reject, vilify and potentially seek to cause harm to this person’s job, family or well-being.

At the Closet on the Right, we know all too well how some are treated when their opinions do not align with the liberal ideology. Therefore, we will refer to our friend as Juanita/Juan.

The story of Juanita begins in Texas. Her family is a traditional Christian family that wasn’t political in nature. Although it wasn’t something they talked about or often discussed, when they voted; they voted Democrat.

Being that Juanita was a lesbian, it made sense that she stayed a Democrat much of her life.

By the time Juanita was a teenager, she was running with a bad group of kids. They would steal, commit vandalism and generally cause trouble. As a hobby, they would participate in activism to fight the patriarchy and other injustices.

She marched proudly side by side her fellow feminist activists. They were passionate about their cause and would use anger and violence to make a statement if necessary.

Her girlfriends were also her partners in activism that helped stoke the fires of the militant feminist groups they were involved in.

This path would ultimately lead her to a dark place where she was faced with two options:

The decision to join the Air Force probably saved her life and helped her find a place to call home. Even for a short while. Four years to be exact. She served her time, kept her nose clean and completed her tasks.

Return To The Frontlines

Once her time was up though, she returned to old habits.

She was what you would call a “granola lesbian”, vegan, androgynous, angry and opinionated.

When she wasn’t working as a vegan chef; she was out disrupting traffic, starting fights and accusing strangers of whatever transgression she thought was fitting.

Their goal was to create change through belligerence and disruption. The louder the better with a motto of,

“OUT OF THE BARS AND INTO THE STREETS!”.

As she grew older, chaos and anarchy became less appealing, so she decided to enroll in college. This would be a pivotal moment in her life. In college, she discovered her love of learning and discussion.

College was also a time of “cognitive dissonance”. People did not fit the stereotypes she held so tight to. For example, she met a Republican Asian Lesbian.

School quickly monopolized her time and activism fell to the wayside. She joined the student government and was heavily involved in student activities. The effect was profound. People from all walks of life were coming together and cooperating despite opposing views.

Gone were the days when she thought being angry and belligerent would change peoples’ mind.

A Change of Direction

The classes she took were focused on counseling, conflict resolution, and psychology. Her view of the world was shifting and changing.

Bill Clinton was in the White House and his presidency added another shift in alliances for this loyal Democratic voter. “Don’t Ask Don’t Tell” and “Three Strikes, You’re Out” were both policies that deeply infuriated Juanita. These policies directly targeted her community and were another catalyst for change.

One thing had not changed though. Society’s treatment of the LGBT community was still very negative. Juanita often faced public mockery of her androgyny. 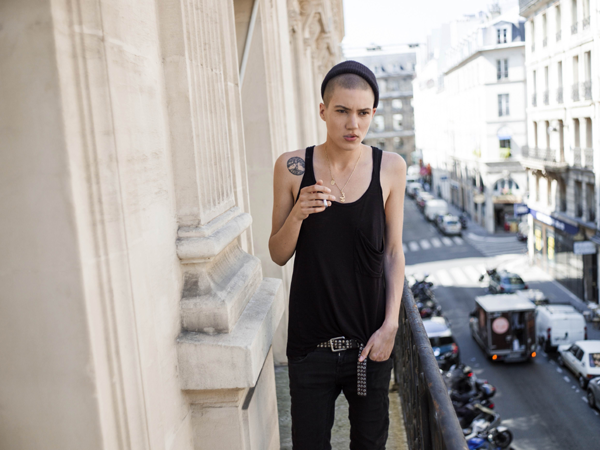 Using the female bathrooms in public was often uncomfortable because other women thought she was in the wrong bathroom. A common question she faced from young children was, “Are you a girl or a boy”. Some even resorted to a physical confrontation that would often end in violence.

After years of harassment, Juanita came out as trans. Her transition from Juanita to Juan would bring more unexpected revelations. The testosterone had a calming effect and helped the anger from years of activism fade away.

He no longer had problems with bathrooms or being harassed in public.

He did have problems in other ways he hadn’t expected. Smiling at strangers, striking up conversations and other niceties he’d taken for granted, were long gone.

Now, if he smiles at a woman on the street, he’s perceived as a “creep”. In the words Juan,

“I sacrificed the female privileges I never even knew I had”.

Strangers began assuming him as a male. Women and feminists, in particular, would treat him the same way they treat all males, like an evil “misogynist”. Now he was a part of the patriarchy. He had become the enemy in the eyes of the people he was once locked arm and arm with.

By now he’d earned his master’s degree and was working in a fulfilling career. His political views were more secular, and he decided how he felt based on the issue.

He was no longer loyal to one party and one party only.

That was until Donald J. Trump came down that escalator. No longer indoctrinated with the ideology of his former activists, Juan saw this wildcard and loved what he had to say.

Hillary Clinton’s history of sexist and racial remarks dating back to her time as First Lady meant Juan was not giving his vote to her. He hadn’t forgotten what her husband had done in office either.

Obviously, being a member of the trans community and voting for Donald Trump was not something he could admit. But since he was no longer a hostage to the liberal echo chamber, Juan used his professional training and analytical mind to form his own opinion.

Now more than ever, he craves respectful and intelligent discussion with his peers. Unfortunately, the fear of the “Liberal Mob” is a legitimate fear that many conservatives live with.

So for now, our friend “Juan” lives inside the Conservative Closet. He’s quietly supporting President Trump behind a veil of anonymity.

His story may be unexpected, but it’s not uncommon. Stories from people like Juan are becoming more frequent.

People are smashing the stereotypes and throwing away the rules of engagement to unite under our flag once again. We’re not gay, straight, black, or white. We’re Americans, and we’re tired of being told how to vote because of what we look like or who we love.

Our values are the same. Our dreams and hopes for our future are still the same. So next time you meet someone who is expected to be a Democrat, keep an open mind. They may surprise you, and give you a little smile for your MAGA hat.